Sharing and cooperating are not something new in a country like Syria, throughout history neighbors here exchange and share products, foods, times, and many other things between each other. And nearly 60 years ago people within the neighborhood used to crowdfund landshare in order to share the crops and the financial returns of it between each other, but this participation has been stalled as a result of the construction and development of the civilian life inside Syria.

In the modern age, there are different forms of collaborating within small circles of friends and family, and few online groups startups that work on swapping and sell used products has emerged. It’s still early for the Arab countries in general and Syria, in particular, to see a large companies working is a major parts of the collaborative economy like caresharing, we need more extensive studies in this regard to determine the strengths, weakness and what work best for us dependent on the culture(I’m working on study about The Rise of Collcons in Arab countries which will be released soon) also we need to spread these ideas and concepts to attract more people to the movement.Therefore on Saturday, May the 11th, we finally hosted the first Ouishare Drink in Damascus and the Arab world it has been a special moment and a huge success.

OuiShare is a global community of entrepreneurs, journalists, scholars, designers, activists and citizens working to accelerate the shift towards a Collaborative Economy. Although we use social networks (Facebook and Twitter) to meet and ask people to join the tribe, offline meetings are the most important part, as we are used to say MPRL or “Meeting People in Real Life”. and these why we had the honor to meet all those amazing people who have the passion in the world of collaborative economy.

For those who are in a hurry, a quick video recap. (Eng Subs)

Being the OuiShare Connector in MENA region, I was happy to apply this concept to the local community by organizing the first OuiShare Drink in Arab world – Damascus Drink #1 at IT Plaza – West Mazzeh, and almost 70 people attended the event.  We started with a brief introductory discussion about Ouishare and Ouishare Fest the first major European event dedicated to the collaborative economy.

After that, we had a short presentation from Wikilogia- our sponsor in Damascus Drink #1. We presented videos from Ouishare community as messages to the Arab World, to explain the potential benefit of the collaborative economy and how it has been a changer in other countries. I came up with this idea five days before the event, and there was no way to make it happen without the incredible spirit of the Ouishare community.

After almost an 45 minutes of chatting, and sharing snacks we had a collaborative economy play, video of the play here in (Arabic), It is a comedy presented by Ali Alsabe and (Me). The aim of the play was to explain the concept of Collaborative Economy by giving an example of two guys who want to kick-start a business and showing the problem they faced in order to make it happen and how they passed that problem with p2p alternatives ideas.

Many local startups were featured on stage in the open pitch session to pitch quickly their projects to the community. This is how we were introduced to IdeasStorm (A company focused on removing barriers between citizens/users and governmental/organizational services and maximizing the benefit from online activity of the crowds),  Wikisghar (Collaborative wiki encyclopedia created by and for children), MicroCommunity (Open source social network platform), Tibbuna (Arabic medical wiki encyclopedia), Open Source Anatomy Atlas (Collaboratively an open anatomy atlas under CC license), and Linking OSN via double hashtags ## (Application can help solving the silos in OSN)

At the end I want to thanks all OuiShare community, Our amazing friends in Wikilogia, Ali Alsabe  the co-organizer, Jud Tan  for the flyer, graphic art and photos. Francesca Pick , Amanda Jansen , Pavlik elf , David Dchtoo and Ducky for the videos messages, all presented project and all people who helped to make this day happened.

Big thanks for attending, we are looking forward to seeing you at the next one not only in Damascus but also in many other Arab cities! (Ping me if you’d like to make in your town) these event will only be the beginning of a way to learn, network and connect. Keep in touch in Ouishare Arab Countries group in Facebook the Arab Ouishare platform for your initiatives, ideas, and projects 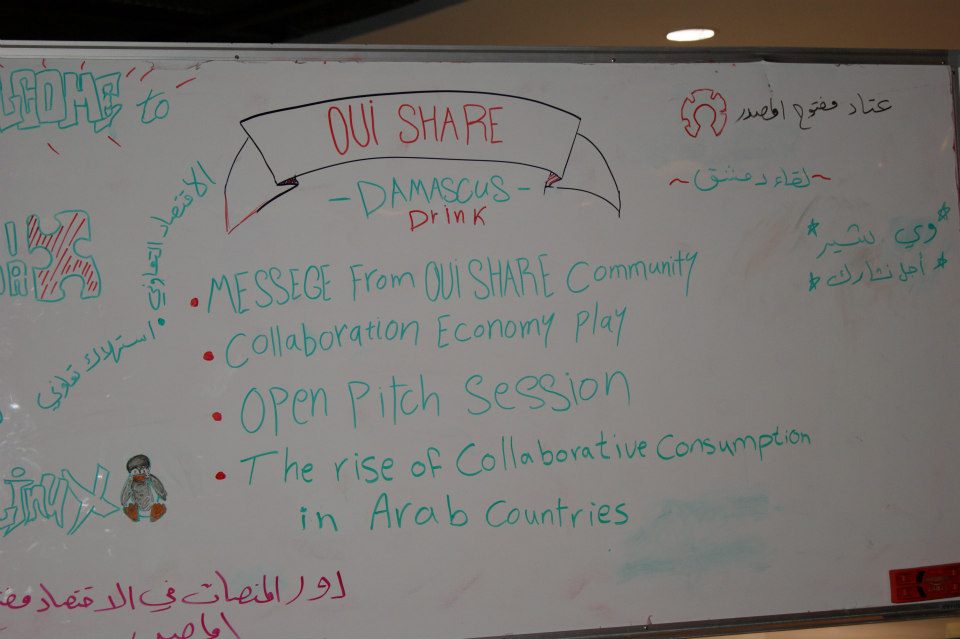