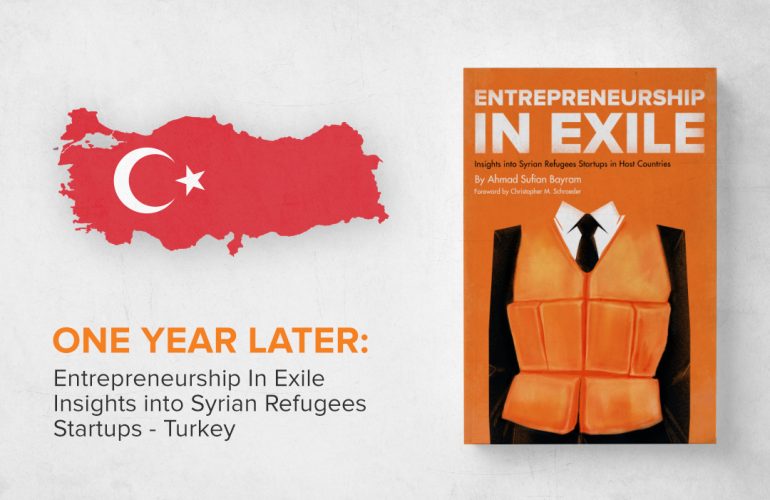 A year ago, I published the Entrepreneurship in Exile study was published to focuses on Syrian entrepreneurs who were forced to leave Syria and become immigrants and refugees in host countries. Built on data from a study examining Syrian entrepreneurs’ views and experiences over 12 months of research, during which 156 interviews were conducted and ten open discussions as well as a series of interviews with entrepreneurial experts. Year after, I wanted to do a revisit on the report and examine the main challenges that faced the entrepreneurs and see what this year has reflected on the Syrian refugees in Turkey.

Turkey has the highest number of Syrian refugees of any single nation, two-thirds of the entire Syrian refugee community worldwide, with some three million people registered under “temporary protection.” The Government of Turkey announced spending over $30 billion on assistance for Syrian refugees.

Alongside the effort of hosting the refugee’s community, a surprising and powerful trend has emerged. A total of 10,000 new Syrian companies were founded in Turkey since 2011, up from only 157 in 2012.

Last year hold many changes for the Syrian refugees in the country. During July and August of the year 2019, Syrian refugees, nonetheless refugees entrepreneurs, have faced campaigns of deportation and arbitrary arrests concentrated in Istanbul. Those actions targeted people who do not hold the temporary residence card called “Kimmelk” in Turkey or those who have a card issued by a state other than Istanbul.

This has separated many startups from their team and is located on the central hub of startup innovation city – Istanbul, the home of the majority of Turkish accelerators, incubators, venture capitals, and conferences, many business owners continue to be concerned about their long-term status in the country. Which made Trave Restrictions, Social Exclusion and Uncertain Future challenges (As elaborated in Entrepreneurs in Exil report) have become harder on the startups during 2019.

The previous laws and actions come at a time of increasing public resentment toward the Syrians presence in the country. In a poll conducted earlier this year, 68% of Turkish respondents expressed discontent with the Syrian presence, compared to 58% in 2016. Meanwhile, the increases in consumer prices have affected the cost of living for the refugees in Turkey, making life is much harder. Besides, issuing the Government of Turkey new decisions to stop providing free medical services to Syrian refugees.

Last year also hold improvement on some on some of the challenges Complex Regulatory Policies, Banking, and Faincail Services Limitation, Language And Cultural Barriers, and Psycho-social Background & Trauma. See chart below

THE AVERAGE TOP REFUGEES’ STARTUP CHALLENGES IN TURKEY ON BOTH 2018 AND 2019. 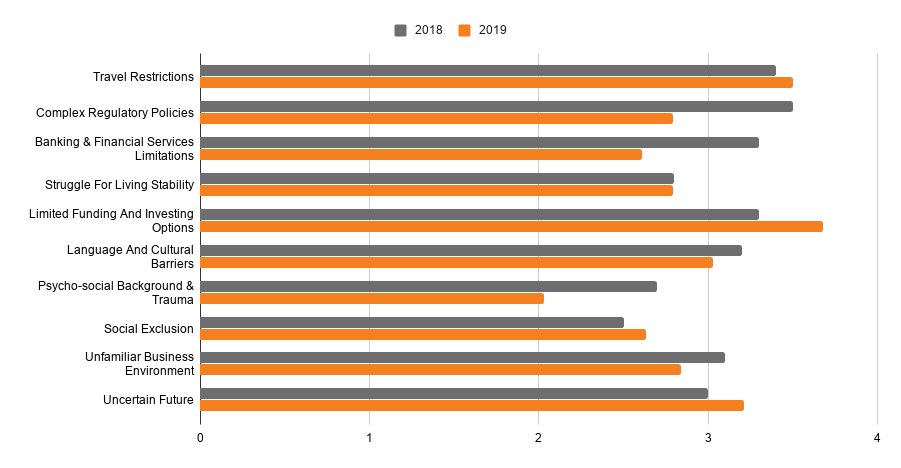