The underlying technology of the bitcoin “blockchain” has become a significant invention of our time, with high potential to disrupt a large number of today’s industries and change the lives of many, including the refugee community. Blockchain technology can help save the lives of millions of refugees by solving some of the most critical problems they face. Here are three ways the blockchain could help refugee and tackle these issues:

Many refugees leave behind important documents, such as birth certificates, marriage licenses, passports, and ID cards, when they are forced to abandon their homes. These documents are nearly impossible to retrieve after one has left the country—assuming they have not already been destroyed by this point! For example, in the Syrian refugee crisis, NRC research found that 70 percent of refugees lack basic identification and property ownership documents.

Blockchain Solution: The blockchain can house and transact unlimited amounts of valued assets through its publicly distributed ledger, and among these valuable building blocks is unforgeable data. Identities verified on the blockchain would be unforgeable, time-stamped, and publicly viewable for all to see.

Host governments and support organizations could start issuing digitally authenticated identification documents based on the blockchain to solve this problem. Refugees could use these documents everywhere to prove their identity and who their families are, open bank accounts, sign contracts, or apply to university.

Bitnation is a blockchain startup that is helping refugees to obtain digital ID documents, which host governments can use to verify one’s identity. The service verifies a person’s multiple social media accounts and links them to the person’s social security number, passport, and other documents to inspire trust in the identity.

According to UNHCR, nearly 22.5 million refugees need daily support from NGOs and international organizations, which all face many challenges while distributing aids to refugee communities.

While supporting refugees, organizations need to keep track of all transactions made in shops and marketplaces to define purchases and approve certain types of them to guarantee proper use and avoid mismanagement.

Blockchain Solution: The United Nations World Food Programme (WFP) directed resources to thousands of Syrian refugees in one of the largest-ever implementations of the Ethereum blockchain for a charitable cause, giving refugees cryptocurrency-based vouchers that could be redeemed in participating markets, which sped up transactions while lowering the chance of fraud or data mismanagement.

The codes of cryptographically unique coupons representing an undisclosed number of Jordanian dinars will be sent to dozens of shops in five refugee camps across the nation. Using eye-scanning hardware to verify the user’s identity, multiple cashiers at each of the shops will then use blockchain technology to redeem the vouchers at the point of checkout.

A study published by the Federal Office for Migration and Refugees and the IAB and DIW research institutes at the end of 2016 revealed that only one in eight Syrian refugees who arrived during the 2016 migrant influx last year is now employed.

Several challenges are preventing refugees from integrating into the labor market—learning the local language and acquiring new skills, for instance—but these issues aside, many of the refugees are still in the process of having their asylum applications assessed, years after arrival, and therefore have limited access to work.

Blockchain Solution: As a distributed public ledger capable of recording transactions securely, the blockchain offers a new approach to enhancing transparency and collaboration between governments, businesses, and citizens, which could facilitate processes among them. Valuable information can be shared widely, with genuine openness, and transactions can be verified in almost real-time.

Furthermore, the blockchain’s smart contracts can automatically carry out certain functions if predefined conditions have been met. Governments could, for example, create “blockchain work permits” for refugees that automatically enable them to deal with employers or businesses directly, even for small tasks, and set up real-time tax payments when they receive income.

In conclusion, blockchain could help the refugee and offers governments and businesses the opportunity to understand refugees better and provide tangible solutions that benefit everyone. Supporting startups that employ the technology is a step toward solving one of the most prominent crises of our time. 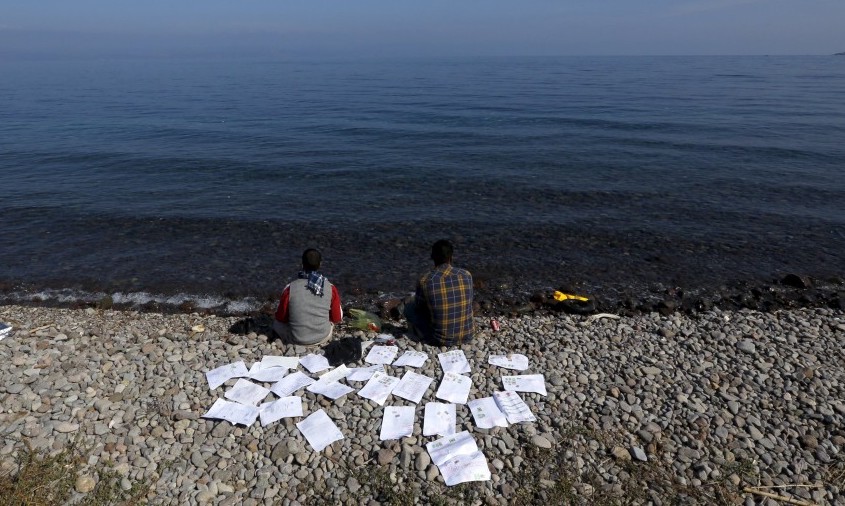